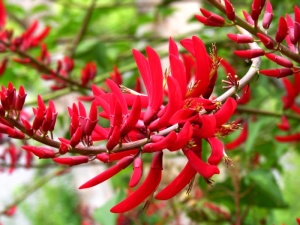 Every gardener makes decisions about which plants to buy, which to increase, limit or get rid of. It’s part of gardening. We each have our biases that cause us to tolerate plant ‘behavior’ that an otherwise ‘rational’ person would never choose. A ‘rational’ gardener would not knowingly acquire plants they knew to be tender in their zone nor would they collect plants with growing requirements they cannot provide. Who said gardeners were rational?  Much of our lives as gardeners we spend learning just these things about ourselves and our little plats of earth. Most gardeners are hopeless optimists and find themselves constantly tempering their runaway excitement for a never ending parade of plants, after all we have limited budgets for replacements and only so much energy to deal with too much attrition. Besides, all of that plant death can get kind of depressing.

The reality is that we each draw this line differently.

For some of us a plant that dies nearly any winter, however mild, will never, knowingly cross our garden threshold. For others, it may be worth it if it provides an aesthetic punch. Why do gardeners buy annuals every year and expect their perennial choices to live forever?  There are plants I’ve purchased over and over again. There are others that I’ve discovered how to winter over at my greenhouse-less garden.

Then there are the plants that lull us with their dependable performance only to lose them after a string of weather events that are outside the normal range. We begin to wonder what ‘normal’ even is? So, we have all of these plants that seem to be hardy, after all, we’ve been growing them successfully, until a winter hiccup comes along and bang ‘you’re dead’. Why???

I’ve been growing Erythrina x bidwillii for over 12 years. I originialy wondered if it would ever bloom here given our relatively cool summers, compared to tropical/sub-tropical conditions, but late every spring it would re-sprout from the base and explode out with 5’ arching stems delivering late summer huge velvety crimson papillionate flowers. Its site, in my back garden, wasn’t quite hot and bright enough and my clay/loam soil, even with liberal amounts of compost was just too heavy. But I never lost it. Then early spring, last year, I got around to digging it, hauled it down the stairs and around to the SE corner of my lot. It responded with heavier growth and a blooming period of around 2 and ½ months!!!

Its new bed was 2’ above the adjacent sidewalk helping with drainage, and spring warming, encouraging better growth. The nearness of my homes foundation may have helped.  The top of the bed is nearly flat so it may have slightly wetter conditions than its old site, I don’t know. So why is it dead now? In both places it received some supplemental water, less in its new position.  Its newer site is somewhat more exposed to winter winds, but this is a deciduous plant. Winter desiccation is not an issue. I think it comes down to two things, first I didn’t add any protective mulch, not that I would every year on its old site, but when this is combined with the mild fall followed by the week in early December with highs below freezing, it was too much. The second issue may have been that when I transplanted it the crown sat at the surface, exposing it more to the cold. For so many years, planting thousands of plants in the Portland area, I have been more worried about a crown being too deep causing it to rot than freezing. Yes, I know Roses are traditionally planted deep to protect the graft union as are many other plants, but in cases where I’m more worried about rot, I have always planted slightly high. Usually this works for me here in Portland. In a conversation with Greg Shepherd of Xera Plants, who has grown the plant in his own garden in years past, he thought that deeper planting would be beneficial. Oh well!!! So anyway it’s on my list to repurchase.

Now we get back to the beginning of this little treatise. It died, yet, I still want it. To me, a plant that lasts better than 10 years is more than worth it as long as it delivers and this plant does, even during all those years that I grew it, when it was shy to bloom much, its flowers are spectacular, and it’s weird enough, this is Portland, that it scores extra points for that. Apparently few people grow this here in their gardens, because I can’t find a local grower who offers it (I’ve never seen it in anyone else’s garden, but maybe I don’t get around enough). Twelve years ago I bought it from Plant Delights in North Carolina, they still carry it as does Yucca Do in Texas, both listing it as a zone 7 plant. Does it do better with more heat than we can offer, yes. We will probably never be able to grow plants that will start blooming in June and go into October like it will in Texas, southern California and the deep South, but if we site it well here there’s nothing wrong with the 2 months we can coax out of them. How long does that Tigridia bloom for you?

I saw my first Erythrina, probably, E. cristi-galli, a small South American tree, on Maui almost 20 years ago. I lost all those pictures when my computer literally crashed to the floor. Yes, E. x bidwillii freezes here and loses its above ground structure every year (the dead top growth makes me think of styrafoam when I cut it away), but this member of Fabaceae takes its typical keeled flowers, the ‘butterfly’s wings’ are small, and blows them up to 2+” long arranged in a raceme about 24” long. This is a definite wow! It’s leaves are compound, though fairly simple for this family, each having only 3 leaflets, and the stems have a few, sparse, thorns, prickles really, that can snag you more than tear.

The aforementioned E. cristi-galli is one of the parents of this hybrid, the other being E. herbaceae native to our Gulf coast and north from Florida to North Carolina. The cross was made in Australia by MacArthur in the 1840’s. There are two forms of this, one, Blakei, has a more shrubby form, probably the one I’ve been growing, and E. x b. Camdeni tending to grow more like its other parent as a tree.

All in all this is a great plant. My only hesitation here is that it’s been one of those plants I’ve had that no one else does. I guess it’s worth giving up bragging rights… there are always other plants.

[I was a little late getting my re-order in but Plant Delights kept pushing their shipping date back. Finally, I ordered from Yucca Do, apparently just as they slipped into their no shipping month, August. But I ordered it anyway and now must also wait until they get their updated Phytosanitary certificates from Oregon Ag. Oh well. I guess this time its about delayed gratification. I doubt that I’ll be able to get enough growth for it to bloom next summer. What’s another year!]