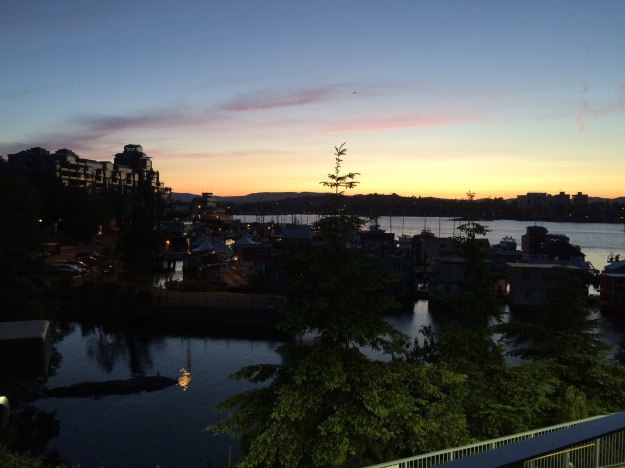 Okay, this is not Vancouver. It is Victoria Harbor, looking at their Fisherman’s Wharf across from where we stayed. I haven’t been back to Vancouver for a few years and as a result of an accident and poor back up, I lost all of those pictures. Right country, almost the same latitude, with a gorgeous natural harbor you would have to try hard to screw up!

Vancouver, B.C., has a beautiful waterfront south of downtown along False Creek merging urban development with pedestrian scale Park.  This is a busy international city, Canada’s major west coast port and a major center of the arts.  Granville Island pokes up out of the inlet housing the ‘Emily Carr University of Art and Design’ among other centers.  BC Place, the site of last summer’s Women’s World Cup Championship, resides a little more inland still close to the water.  Here the city is built  to advantage along its waterfront.  Of course on the north side is the famous and beautiful Stanley Park and a more urban edge snugging up to Vancouver Harbor, with an amazing view across it and on to the snow covered mountains including Grouse and Whistler not far to the north.  Pedestrians abound. while commercial shipping on a large scale moves in the middle distance, along with the many float planes private, tourist and small commuters.  It is around False Creek where the City has more recently redefined its relationship with the water.  It is a gorgeous setting.  All combined Vancouver’s, new and old, waterfront is my favorite along the West Coast, ahead of Seattle and San Francisco.

Looking toward the Bay Bridge along San Francisco’s Embarcadero walking east from the Ferry Terminal toward AT&T Stadium sited beautifully on the Bay, where the Giants call home.

Urban waterfronts developed as ports, places of commerce, serving as vital conduits for the economic growth of their then young cities.  As downtowns have continued to develop this land has become more valuable and port activities have moved further away often with better access to highways and railways which are essential to distribution than the now congested city centers can afford.  These old port areas often languished until both political support and money became available to redevelop them as public spaces, often Parks.  Portland was an early West Coast adopter of this conversion process removing the barrier that was Harbor Drive and inviting Portlanders to stroll along the Willamette, a river that had suffered much abuse and pollution for many years.  At the time Oregon was making great strides in cleaning it up and now by building the Park, Portland was celebrating its ongoing accomplishment and named it, arguably, after one of our most popular governors, Tom McCall, who was responsible for some of Oregon’s most innovative land use legislation, securing public access to our beaches and providing a vision for the Willamette River which still drives much of the redevelopment.

Expansive lawns replaced concrete and asphalt.  Portland’s bridges became architectural features in its new park and it became a nexus for the community.  Portland was in its early years of reclaiming the City for residents.  Neighborhood Associations were formed and, to some degree, the City, adopted them, including them in its political processes as they never had before.  With Mayor Goldschmidt pedestrians began to reclaim the downtown area from the dominance of automobiles.  Neighbor Faire and Art Quake, born of the community, celebrated the City in the new Waterfront Park.  And then, at some point it began to change.

The Park began to be reserved for large events, ostensibly of community import.  Large fund raising events began to take precedence.  And then the rush was on.  Its central location grabbed the attention of ambitious organizers.  Organizations began to compete for a limited calendar.  The big events dominated carving out and securing their dates while smaller events competed and argued for space.  Parks staff soon found themselves in the position of being part of a very small group who were trying to cap these events in order to save it from over programming.  The whole process became highly politicized and for many of us, those whose responsibility it was to care for and repair the Park, found ourselves in a very ‘weak’ position.

Setting up for the Bite in ’15. The turf had not recovered from earlier events

For the 16 years that I was the horticulturist responsible for our downtown Parks, among them Waterfront, I was essentially helpless to effect the massive assaults on the plants and landscape this Park, in particular, had to endure annually.  I would often at such times take pains to point out, as a horticulturist, how decisions were counter to good practice and that as such were costing the City.  Alas all decisions are political and as such carry with them costs.  Political will carries.  Most of the year our Waterfront Park is in a constant state of repair.  It simply can’t withstand the heavy use it is subjected to every year.  Each year the big events contribute to a fund to repair the Park and even they are often unhappy with its condition when they take ‘possession’ for their event.  Much of the event season, summer, sees the Park with worn, bare soil expanses, regularly reseeded in attempt to ‘repair’ it before the next event.  Turf areas that aren’t worn away are often severely drought stressed and are difficult to green back up in summer’s heat (These areas have their irrigation systems shut down during events, set-up and take down.)  Crews are often required to repair damaged systems after events before they can turn them back on.  The trees suffer from large tractor trailer rigs in the Park occasionally snagging and tearing out branches and driving over their roots.  The public often ‘spills’ over into planted bed areas compacting soil, breaking or killing plants.  There is an inherent conflict between such events and park landscapes and the organization is aware of it.

This is the ‘bowl’ where the Blues Festival’s two main stages are set up, the day after the close of the event. It was a record hot summer and had only the irrigation system been shut down, without the tens of thousands of visitors, the turf would be in a similar state. It took many more weeks to bring the turf back this year because of the heat and much higher evapo-transpiration rates.

Portland Parks and Recreation put together a new Master Plan for Waterfront Park approving it in 2003.  In acknowledgment of this problem the new plan set aside an area with a more durable surface that could withstand such use/abuse.  This plan remains on the shelf because, once again, political will and funding are lacking.  If implemented this plan would limit much of the area currently used for large events in part because of its regraded and sloping surfaces.  These events simply need someplace else to be staged.  They will always remain as a burden on the Park while they are held here.

This is an example of how some of the ‘collateral’ damage occurs from events with fixtures and structures erected next to planted areas. Event staff and vendors often ‘push’ into these areas because they offer available space separate from the crowds of visitors who themselves will sometimes move through these to avoid bottlenecks.

Gov. Tom McCall Waterfront Park is being asked to provide what it cannot…and it has suffered greatly as a result.  It has never become the casual use park many would like to to be, limited to small events where picnicking, games of frisbee, quite lunches and exercise predominate, as a place where the larger community comes together as it can only in a casual setting.  These things do all happen here, but the primary driving force here are the big events.  Much of the Park’s shared borders still lack the necessary pedestrian uses and scale to draw people in.  Naito Pkwy still serves as somewhat of a barrier bolstered by surface parking lots and office uses.  Bridge ramps also serve to isolate especially the north end of the Park.  Other cities have more fully integrated their waterfront parks with the street level life of their cities.  Here, in the north end, where these connections are at their worst, is where we have our increasing problem with resident homeless populations and, unfortunately, other hard core uses of drugs and alcohol.  This is where these people have been ‘pushed’ and since they must be somewhere, have gravitated.  Portland has not dealt directly with its homeless/housing/job problems either.

To our immediate north, Vancouver, WA, is beginning work on the revitalization of its own old waterfront area.  It’s plans, in conjunction with its private partners, are ambitious, and potentially beautiful.  They are not just adding a park on to the side of a City that had long ago turned its back on its own waterfront.  They are rebuilding and providing connections along with pedestrian scale uses that should at least make the physical connection seamless.  I have not had a chance to see the completed plans, but all looks well so far as they approach their initial construction phase.  My main concern for them now is that their ‘festival lawn’ is both engineered well enough to withstand its coming use and that there is a political will there to keep the Park for the use of its residents and not for event space.  While raising money for identified organizations is a great thing we can’t forget what should be the primary purpose of Parks in the first place.  Hopefully, Vancouver, WA, has learned from its neighbors to the north and south.