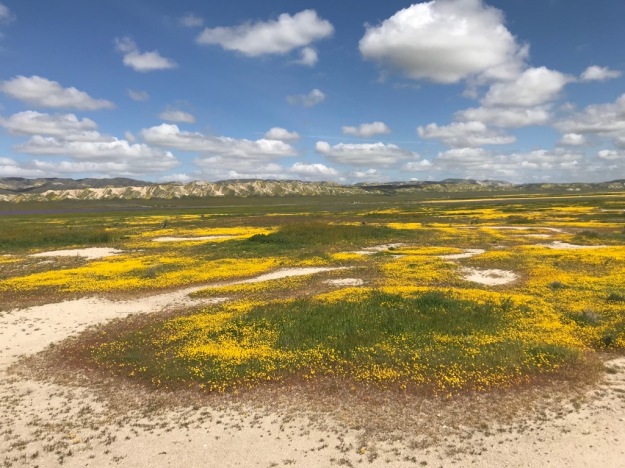 The soils here, on the bottom of the Plain, are quite alkaline and nutritively poor. These bare areas occur almost randomly and aren’t the result of foot traffic. While technically termed a grassland, across much of the Monument grasses appear to be a minor player, occurring much more frequently lower on the framing hills. It makes one wonder what do the cattle eat? I imagine much of this was never farmed either. Dry land farming was always a chancy endeavor in the West. Places like the Millican Valley, east of Bend, OR and points south, were the sites of many a failed dream and such farms, after much promotion and the aid of several moist, milder than normal years. I don’t know the history of dry-land farming on the Plain, but it must have been difficult.  Semi-arid grasslands in general are fragile landscapes. Plowing them can lead to a rapid loss of organic matter and with it the ability to retain soil moisture reducing one’s chances for success even more. The native people left here after having been resident here for centuries. Is it drier today???

Why go visit the Carrizo Plain National Monument?…it is the last, significant, mostly intact, natural grass land in the state of California and puts on a floral performance that can be a showstopper when weather patterns produce sufficient rain over winter and early spring.  This area was largely overlooked as the much larger Sacramento, San Joaquin and Salinas Valleys, also natural grasslands, attracted the interest of agriculture and settlers.  The intensity and scale of agriculture in those valleys is mind-boggling, almost numbing.  Today the big three support only small remnants of their former native biotic communities…much like the Willamette Valley here in Oregon…but Carrizo is different, largely because of its geology and elevation, two factors which strongly effected both the soils and weather, making it less attractive to agriculture and isolating it from markets. END_OF_DOCUMENT_TOKEN_TO_BE_REPLACED