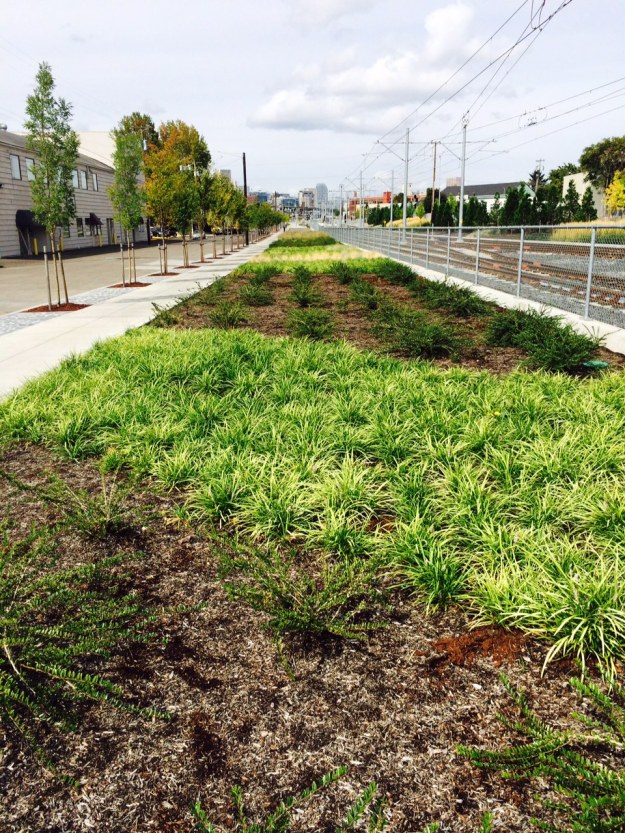 This shows the banded pattern common today in long mass plantings each swath a single species going for a kind of landscape scale ‘graphic’ pattern that is less concerned with ‘fit’.  This is near the Clinton/ SE 12th stop.

Size matters.  In horticulture it changes everything.  Things that are inconsequential, or maybe even enjoyable in the backyard garden, can quickly become daunting or onerous when the scale is ramped up.  Working at a commercial or institutional scale has to change your entire approach to the landscape.  In a small garden it is easier to accommodate mistakes, the conflicted combinations and those issues of horticultural ‘fit’ that we missed when we design or install.  Scale, however, rubs our faces in it everyday, makes us pay with aching backs as unintended consequences play out across the thousands of sq.ft. and acres.  It becomes a matter of physical survival and undermines your professionalism.  You become perforce part laborer, part diagnostician, designer, plantsman and critic….Out of necessity you sharpen your critical thinking skills and the last thing you ever wanted, your sales skills, as you work to sell your ideas to management who are absurdly ignorant of the problems you face everyday in the field.  And, then, eventually, you retire, but you don’t turn it off…you can’t.

Which brings me to the MAX Orange Line and its landscapes.  When I did horticultural design review for large capital Parks projects, it often felt like a dueling match.  I would pour over the design, whatever the stage it was in, match that with my particular knowledge of site conditions and my maintenance experience within Parks.  I would state my concerns on paper and in meetings with the Project Managers and Architects.  I was stubborn and consistently found myself up against a process that undervalued horticulture and my input.  Good horticultural practice was regularly placed in a losing position opposite not just that of the Landscape Architects but of a very political process that tried to give the public what it wanted as long as it fit within the Architect’s vision.  Horticulture always came out a poor third, even though good horticulture always saves money in the mid and long runs.  It was exasperating.  The public, by and large is ignorant of horticultural practice and no effort is made to educate them at any level. END_OF_DOCUMENT_TOKEN_TO_BE_REPLACED

This is off topic, so If you’re looking for a horticultural twist here, there isn’t one.  Those of you who don’t know me should understand that my first degree was in Sociology, that I had intended a career in urban planning.  Things happened.  The fit was wrong.  But, the function of our social institutions, like our political system, has always fascinated and exasperated me.  I am not a man of faith as a rule and I expect those above me to demonstrate their competence and hearts in their work.  Words are too often used as a smoke screen.  I think we are way beyond the point where words can substitute for action.  So, here we go.

What’s on my mind? Lots lately. The growing crisis in affordable housing here. The yawning chasm between the super wealthy and the rest of us and their spending of money to buy legislation and Congress, climate change which apparently has been banned from some states…the solution should be so simple….
The letter below is what I’ve been thinking of most recently, a letter to Americans of all political affiliations and stripes. The future is upon us friends. We have not been invited to the party!!!

I am a bit obsessive in the way that I look at the world. I can’t let it go though I’m regularly told that I would be happier if I did. Global warming, the looming Cascadian Subduction Zone Quake, the yawning chasm between the super wealthy and the rest of us, the violence and war that has become common place, a growing human population that is putting every resource under increasing pressure from arable land, to fresh water, building materials and petroleum to wildlife habitat and the wild places that can replenish our spirits and restore us; Congress and governments at every level that seem incapable of ‘correcting’ anything, mired in juvenile squabbles, the mind numbing loss of species worldwide and in our own country that we seem resigned to, oh well, what can be done? There is a blasé sense of resignation that takes the place of a meaningful public dialogue…that and finger pointing. And our leaders seem okay with it. END_OF_DOCUMENT_TOKEN_TO_BE_REPLACED