Podophyllum x ‘Spotty Dotty’ emerging this Spring.  Remember that these leaves aren’t small.  When they open to their mature size, at about 18″ across,  they’ll absolutely dwarf the vari-colored leaves of your Pelargoniums.

People will often ask me how I grow something, generally when its something they’ve killed, when our conditions, exposure etc, seem pretty close. I’ll shrug, because I may not have done anything special for my plants beyond, hopefully siting them appropriately. Then, there are all of the plants I’ve killed, sometimes repeatedly, that others seem to have success with while doing little more than ‘dropping’ them in the dirt.

I have a bit of a thing for the members of the Podophyllum…and almost everyone I know, who grows them, does so more successfully.  I do have a very ‘happy’ clump of P. pleianthum, and I’ve grown it in Park beds very successfully downtown, but until now I’ve had very little success with any of the others.  Most have lead short, tragic lives….P. delavayi…dead; an unnamed P. delavayi hybrid…dead; P. versipelle…dead; P. x ‘Kaleidoscope’…dead; P.(Sinopodophyllum) hexandrum…dead; P. x ‘Spotty Dotty’…dead; even P. peltatum...dead.  Some of these I’ve killed more than once.  These are usually relatively costly plants to acquire and their loss is more than emotional.  Sometimes I’ve grown them on in their pots for a year before I’ve thrown them into my garden to their deaths.  I’ve lost several other plants from the Barberry family as well, having consistent success only with the shrub forming species and Epimedium spp..  I’ve lost both NW species of Vancouveria as well as Achlys triphylla, one of my favorite ground covers, all of which I’ve grown successfully when I worked in Parks. These shouldn’t be hard.  I’ve grown quite a few different Epimedium spp. and varieties at home and several in Parks, all of which have been consistent and dependable performers.  For a long time, my failures with Podophyllum and assorted woodlanders,  was an embarrassment.  I couldn’t figure out why I kept losing them.  I have a hard time with many Himalayan plants in my garden and a lot of woodlanders in general, I think because it may just get too soggy over the winter.  They’ve taught me to shrug when they fail to emerge in spring. 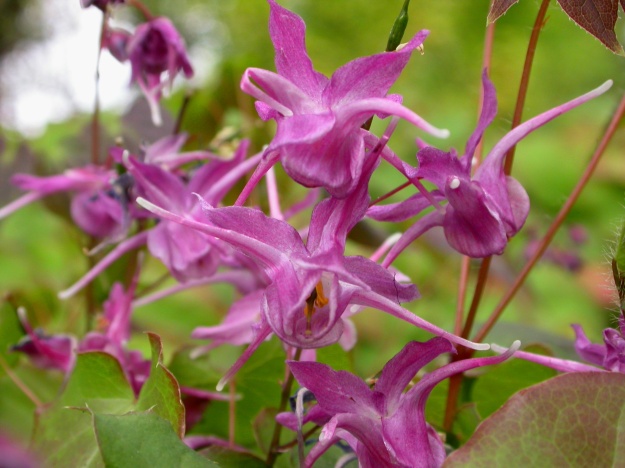 A cluster of flowers on Epimedium x ‘Lilifee’