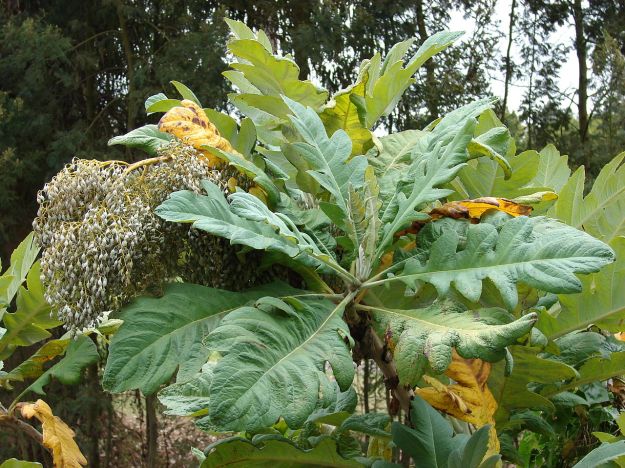 Bocconia frutescens with its inflorescence of single seeded fruit, one of the ‘woody’ Poppies that comprise the genus.  Macleaya cordata, from the same family, has a similar look, though topping out at around 8′ and is herbaceous in habit dying to the ground each winter.  Another Wiki picture of Bocconia f.  growing in Hawaii’ where it has escaped cultivation and threatens the few remaining native landscapes, particularly historically dry and mesic forests.

The title’s question isn’t something we in the Pacific Northwest need to worry about.  It will take an awful lot of global warming to make this plant cold hardy here and that may be part of its enticement!  I chose this from Jimi Blake’s list…because I am a sucker for cool foliage.  Sometimes called the Mexican Tree Poppy this is a Poppy, a member of the family Papaveraceae, a family currently containing 42 genera and 775 species, which is within the the ancient order, the Ranunculales, an order that includes some of the earliest of the ‘modern’ Eudicots to evolve.  This doesn’t mean that this species of Bocconia was around at the beginning of ‘time’, or even of this order, just that it comes from that particular genetic line, a line that has been traced back to its beginning, millions of years ago.  Recall that every plant, every organism is in ‘process’, that given the appropriate supporting conditions, consistent over time, will keep reproducing, generation after generation…and, that given the appropriate inducements, of consistent, changed conditions, different from those today, will work to adapt to them, each generation ‘responding’, those better adapted, surviving and reproducing, altering the species and, perhaps even becoming, producing, a new one.  One of the characteristics of this family and order, having arisen in a time when genetics and characteristics of plants were less strictly defined, is a wider range of physical or morphological variation than you might expect, which is evident when you look at the flowers of the many diverse species within these genera, this family and order…Bocconia frutescens’ small flowers looking very unlike those we would commonly think of when we picture a Poppy. END_OF_DOCUMENT_TOKEN_TO_BE_REPLACED