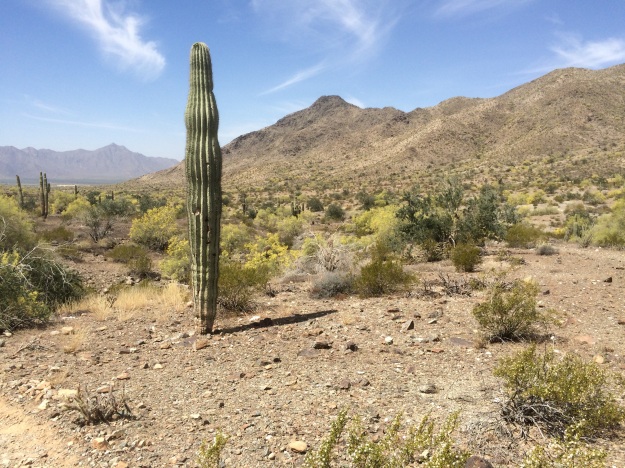 A Saguaro along the Bajada Trail looking toward the Estrella Mountains in the distance to the west and Ma Ha Tauk Range above me to the right.

(This will be one of several entries describing hikes, botanical gardens and arboretum I visited in southern Arizona this April, 2015.)

Today Julie has work to do (She’s on a buying trip and I tagged along!) so I’m going out, down to the Phoenix South Mountain Preserve to hike a loop on the Bajada (the incline at the base of a mountain formed by the erosion of the mountain) and Alta (or high) trails. The Preserve, at over 16,000 acres is the largest municipal park in the US (Portland’s Forest Park pales at 5,172 acres.) I began my hike going the ‘wrong’ way on the Max Delta Trail having incorrectly read the directions so I added an unnecessary mile by the time I figured it out. The Bajada Trail climbs only 40’ but it constantly wends its way around rocky barriers and down and back up washes filled with tumbled granites…. The hike and region lies within the Sonoran Desert Scrub region, Sonoran, because the majority of the plants are sub-tropical in origin and are associated with the plants of Mexico’s Sierra Madre Occidental and Baja Region, not plants from the Rocky Mountain Plateau. The Salt River, that ‘flows’ south and west through Phoenix, is the northern boundary of this region, where the area becomes transitional as it gains elevation climbing to the Verde River and Mogollon Rim. Okay, too much. 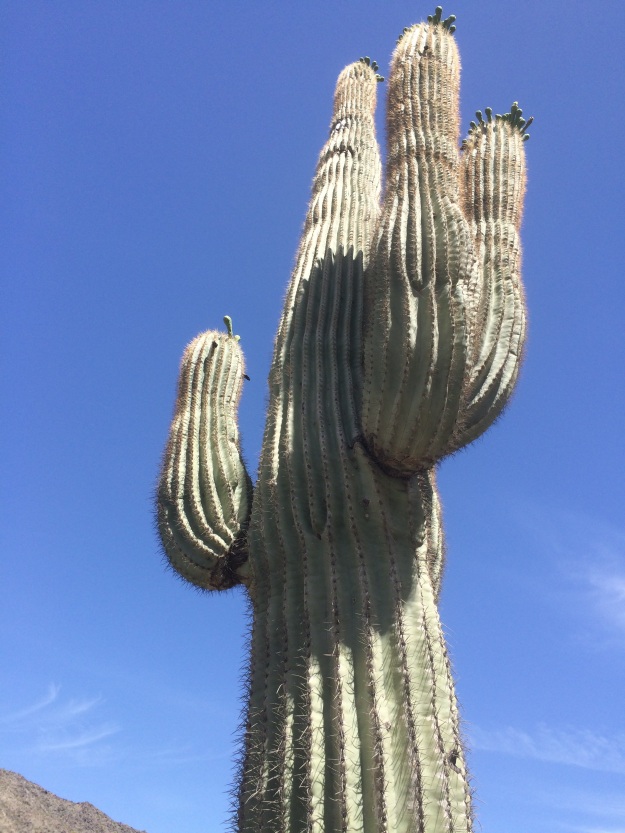 This is my second visit to the region and the second time I’ve seen these all budded up without blooms! (See the little nubbins arrayed on top?) I’m standing shooting up for those who don’t know how big these get.

The Sonoran Desert is characterized by Saguaro Cactus, the iconic tall, often armed, cactus that seems to stand incongruously across the landscape along with woody Legumes, like Palo Verde, Mesquite and Ironwood, among others. Uniquely the area has two wet seasons, the summer monsoonal thunderstorms that historically pass through with the beginning of July, originating from Baja and the southern Pacific; and the winter/early spring rains that begin in the northern Pacific, which dominate Oregon. The two ‘wet’ seasons split the annual total. Interestingly, as deserts, Central Oregon’s averages mimic those of the Phoenix and Tucson areas, at least in non-drought years. The much warmer average year round temperatures then obviously dry this area quickly so that many plants have adopted a broad shallow root system, like Cacti, to quickly draw up any precipitation they can or plants like the woody Legumes that send down deep tap roots and often occur in and around low spots, draws and washes where water tends to be available at depths. 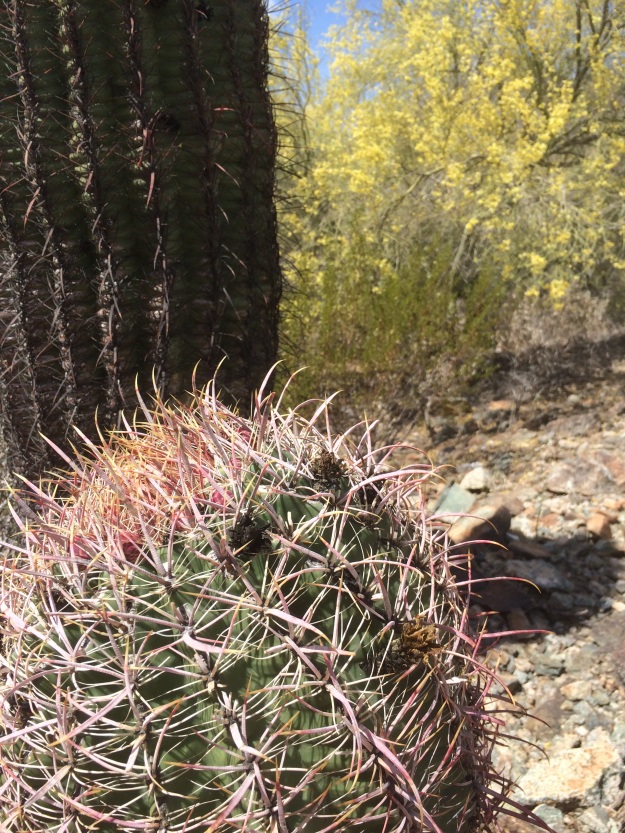 These Fishhook Barrel Cactus, Ferrocactus wislizenii, occur all along the trails, as these are relatively low mountains. 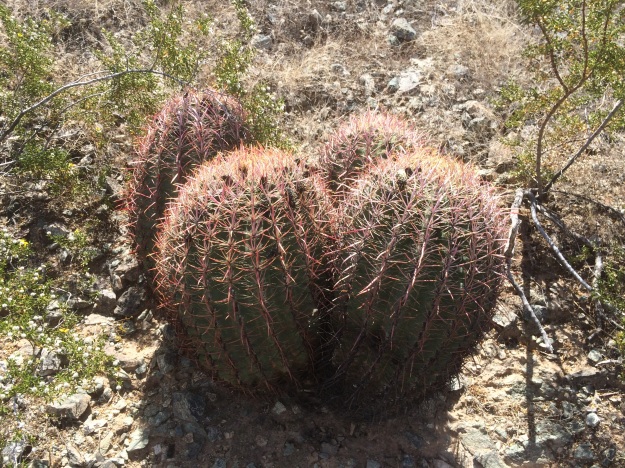 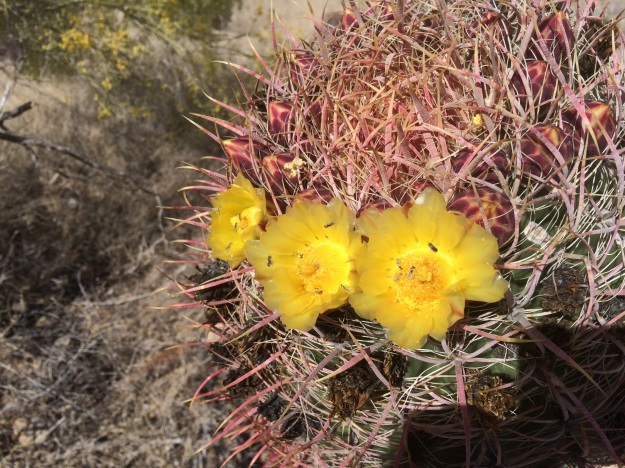 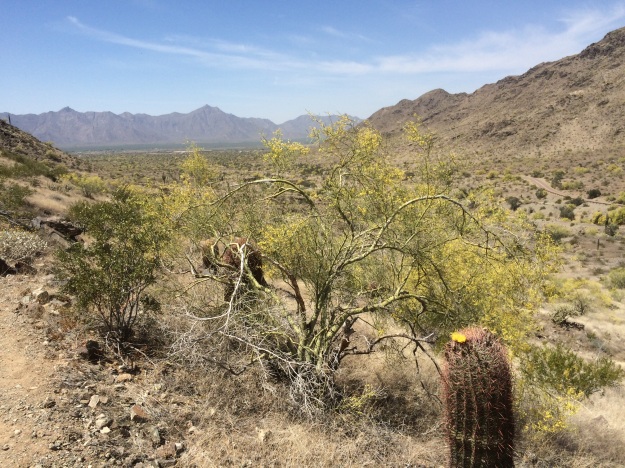 Fishhook Barrel Cactus along the Bajada with Palo Verde, Parkinsonia sp. and the darker Creosote Bush to the left.  Estrella Mountains in the background.

The Bajada Trail traces the closed San Juan Rd between the two ridges, the Gila Range, to the south, this trail hugs, and the Ma Ha Tauk Range on the north side. The two Ranges create the narrow Bajada in the trough between them with the ridge tops just over a mile apart, straight line distance. It is a compressed and rugged landscape that is deceiving to the eye. The Bajada follows along near the base of the Gila. The air is still here and the two adjoining ridges tend to reflect and increase the heat. As I walked I began to discern patterns in the vegetation. There were few grasses and very few herbaceous perennials. This area was dominated by the woody Legumes with Saguaro scattered amongst them.  This is characteristic of the Sonoran Desert Scrub biome which dominates the lower elevations throughout the Sonoran. The woody Legumes always increased in density in and near the draws/ washes thinning out elsewhere on the Bajada and in some drier/rocky areas being completely absent. 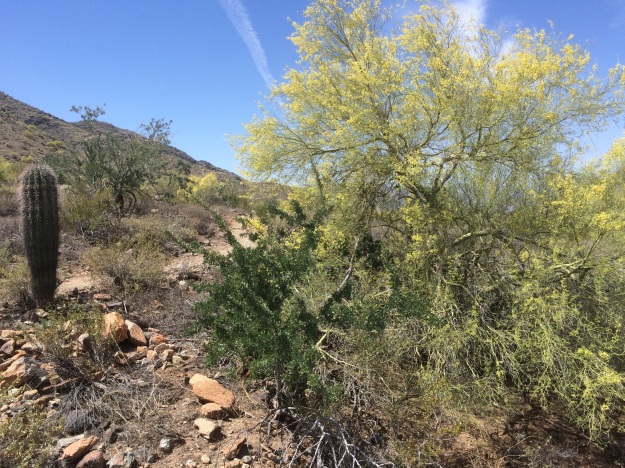 Palo Verde, Parkinsonia sp., and others. 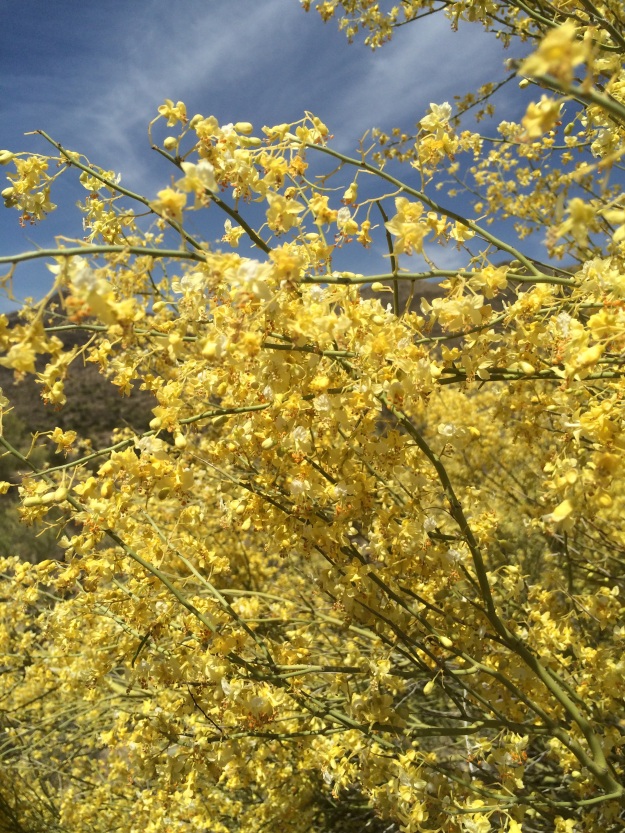 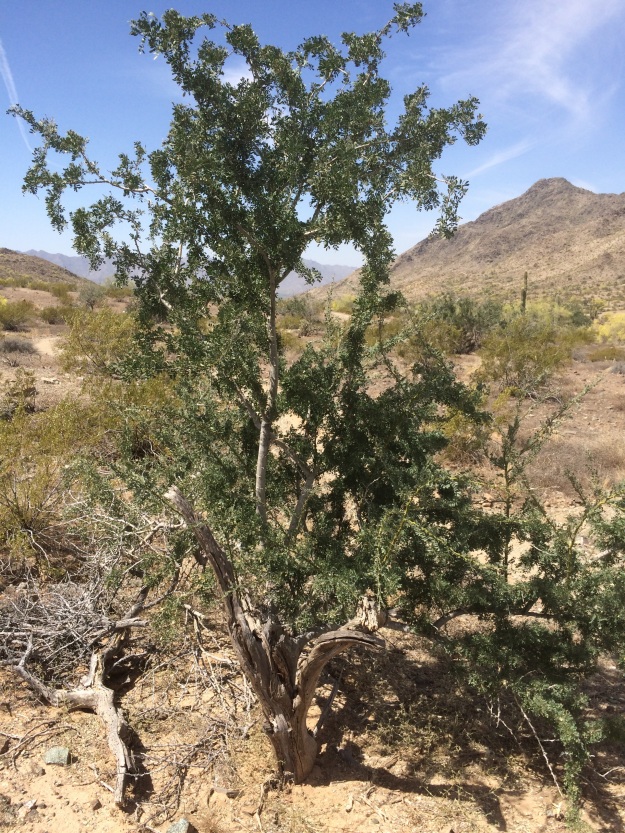 There are so many desert dwelling woody legumes, that I hesitate to guess which one this is. I’m not even sure which genus it might be, Acacia (?). While not common along the Bajada it did pop up regularly.  Somebody help me out.  Is this Desert Ironwood, Olneya tesota, the keystone species for Sonoran Desert and yet another Woody Legume?  Ironwood Forest National Monument was carved out to help protect this species down west of Tucson.  We didn’t make it there.  It is a very important nurse plant for many of the species, plant and animal, in the community and extremely long lived.

Nowhere were they much taller than 10’-12’. Fish Hook Barrel Cactus was much more prevalent here and, for the most part, was more plentiful than the Saguaro across the whole ten miles regardless of elevation and aspect. Very little bloom appears to have occurred this spring to date on them. Cholla are even less abundant along the Bajada with a few exceptions such as on rocky/even drier out-croppings and ‘bulges’. In a few of these places they dominated all other plantings. 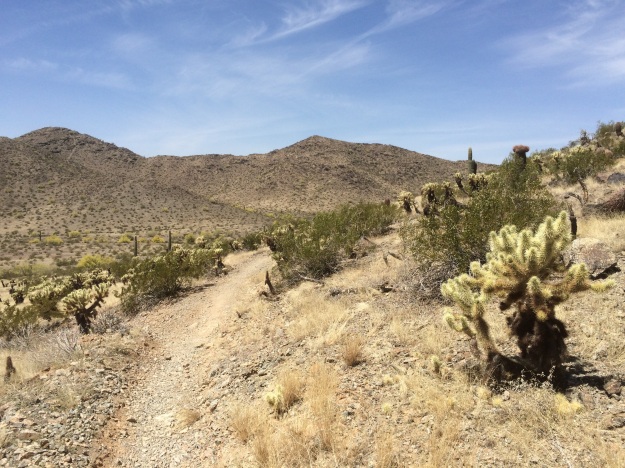 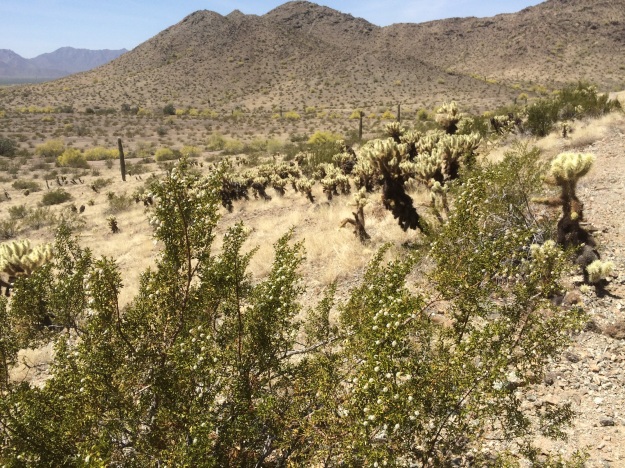 Other plants like Brittle Bush and Creosote Bush were very common along the Bajada.  Creosote Bush can form clonal colonies, forming rings as the old mature plant dies out that can be 50′ and more across and an estimated thousands of years old.  At the same time, to establish seedlings takes several years of abnormally cool and moist weather, without it they die. Mature plants are very adept at pulling water from even dryish desert soils.  And the resinous oils that it contains aid it reducing water loss.  Successful desert plants have made amazing adaptations to their conditions. 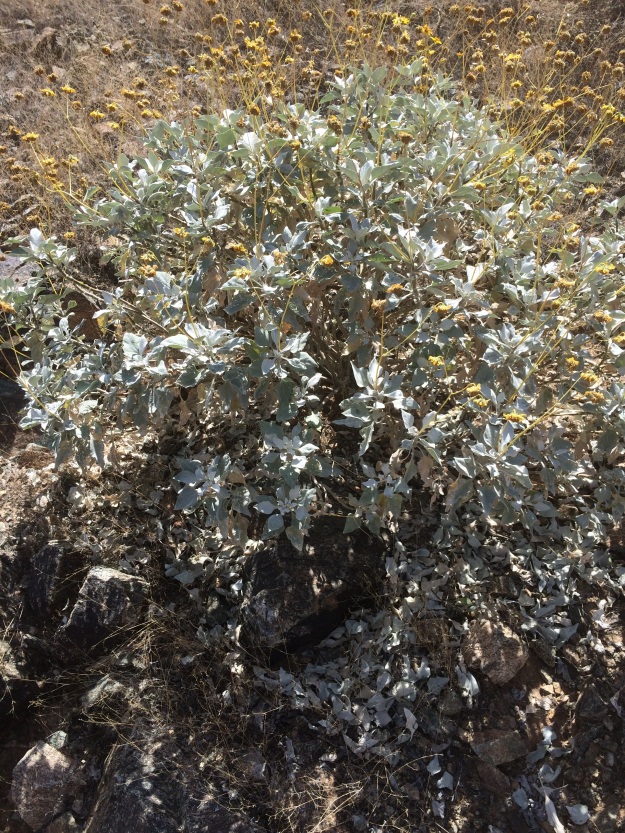 Brittle Bush, Encelia farinosa, has nearly white foliage, heavily pubescent. I seemed to have gotten here a few days late for its flowering here as they were all fading. 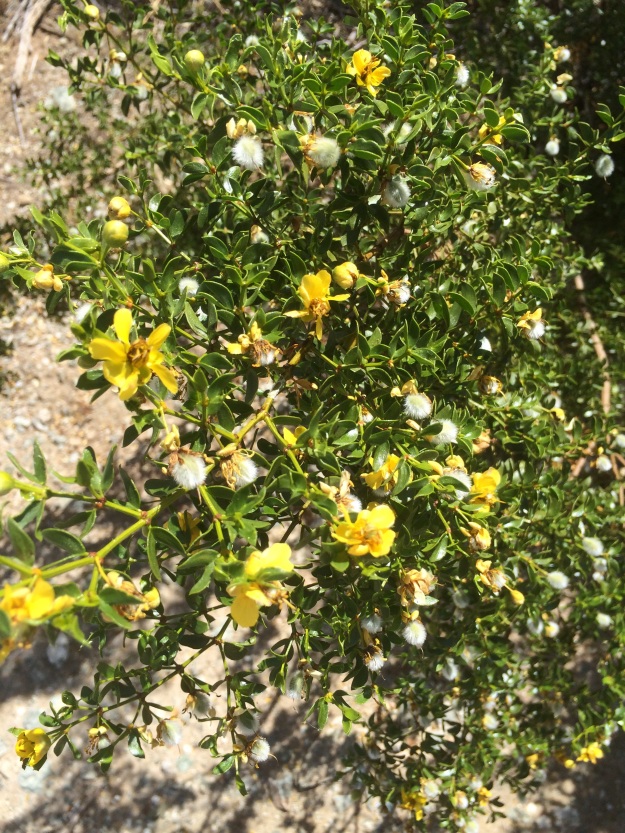 The ubiquitous Creosote Bush, Larrea tridentata. This is a very small one but shows foliage, its bright yellow flowers and downy seed heads. After a rain, I wouldn’t know, it is said to emit a creosote scent.  Family Zygophyllace.

At the west end of the Bajada, after it joined up with the National Trail leading me to the base of the big climb on the Alta Trail, it crosses San Juan Rd and there is a rest area, a shade structure built of rock, the San Juan Lookout. I met a local here and we talked about the trails and the changes he’s seen in the Phoenix area since he moved here with his family in ’63. He took the trail out to the road, the road I failed to find earlier and I began the climb, about 1,100’ in a mile, on rocky switchbacks that looked like they might cause a lot of slipping if you were coming down. I was glad to have my poles. The many switch-backs are visible as you climb as is the ‘Lookout’ at the base and the flat irrigated farm land that lies between the South Mountain Preserve and the Estrella Mountains to the west in the Gila River Valley. This trail climbs and then traverses the ridge bouncing up and down in elevation mostly on the north facing/ Phoenix side where a breeze helped cool me. This is really rugged terrain, with precipitous drops in places, narrow trails with many places where it had nearly washed out or suffered the erosion created by those taking shortcuts between switch-backs. The views to the north and south would be pretty spectacular were there no haze. The flatness of the land around all of the various mountains makes their appearance very pronounced. (Today’s high was supposed to be 86! Mild I’m told.) I think I was rationing water a little too tightly as the climb seemed more difficult than it should have been to 2,430’ (Phoenix’s downtown is at 1,117′). 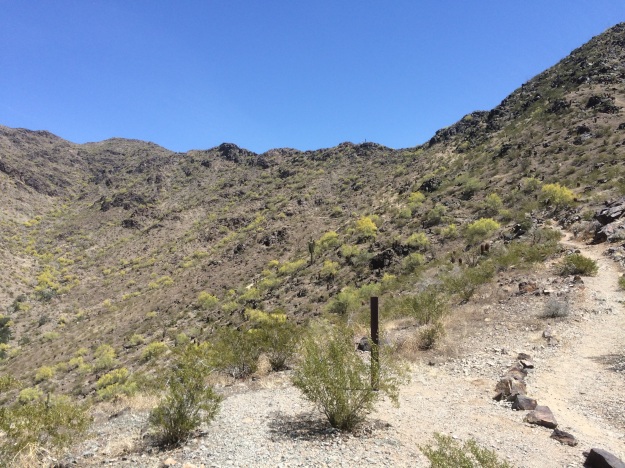 What is it about looking up? It never looks as far or high as it actually is.  My immediate destination is just to the left of the high point here. 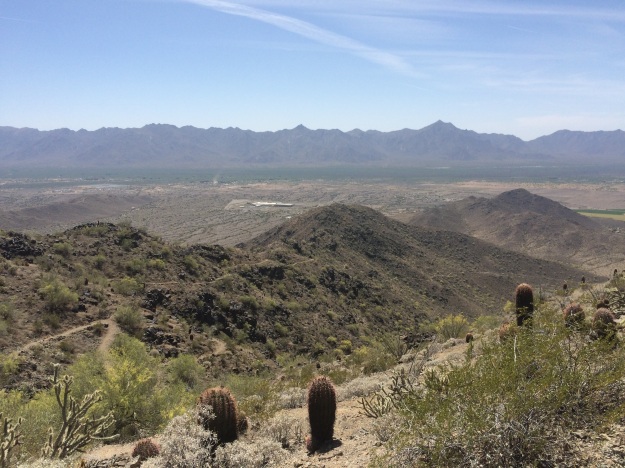 Looking west from the high point. The Estrella Mountains in the distance; the Gila River Valley and its irrigated fields; San Juan Lookout the light ‘tan’ area at the mid right edge of photo; and the line of the trail I just ascended at the west end of the Ma Ha Tauk Range. 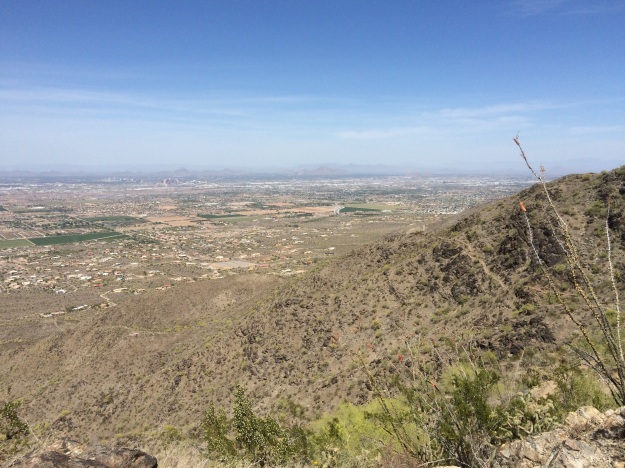 Near the high point of the Alta trail looking north toward Phoenix. 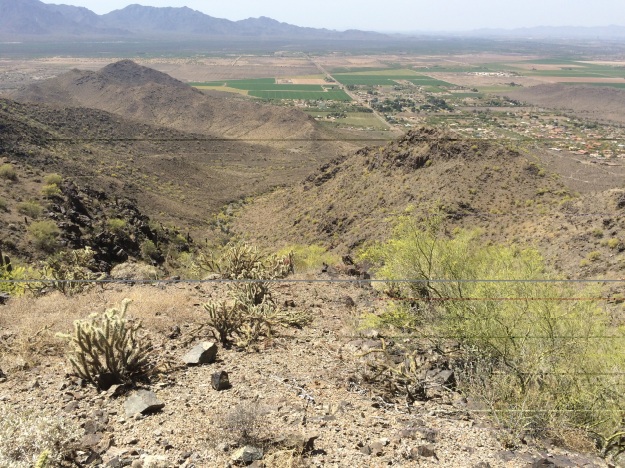 This north side of the Alta Trail, because it is somewhat shadier/cooler, had considerably more herbaceous perennial material like Sphaeralcea (the Orange Globe Mallow) which was more abundant and blooming at higher elevations, Salvia and ??? The Fish Hook Barrel Cactus was the dominant species here, Saguaro less than in the Bajada, Buckhorn and Teddy Bear Cholla was thinly scattered and there was Echinocereus with its magenta flowers blooming here with a handful of Opuntia making an appearance. 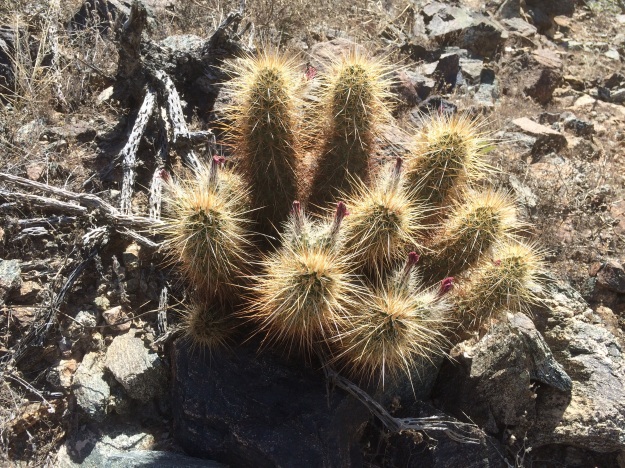 Echinocereus sp., with a dead and dried Cholla ‘skeleton’ next to it. 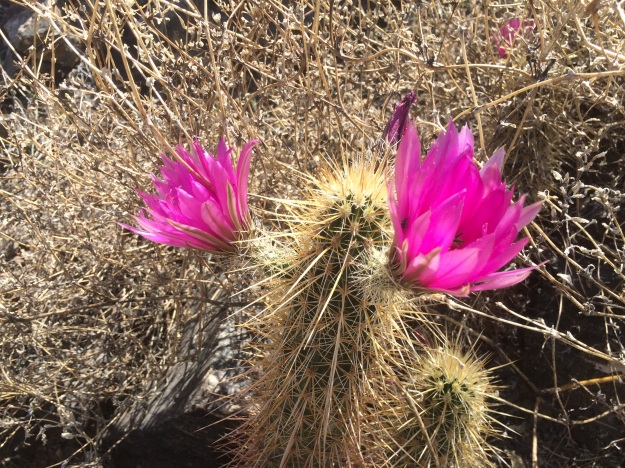 Echinocereus sp. on the Alta Trail. What’s not to love?

Blooming Ocotillo spotted the north slopes randomly. The woody legumes were less common probably due to the steepness and quicker runoff. 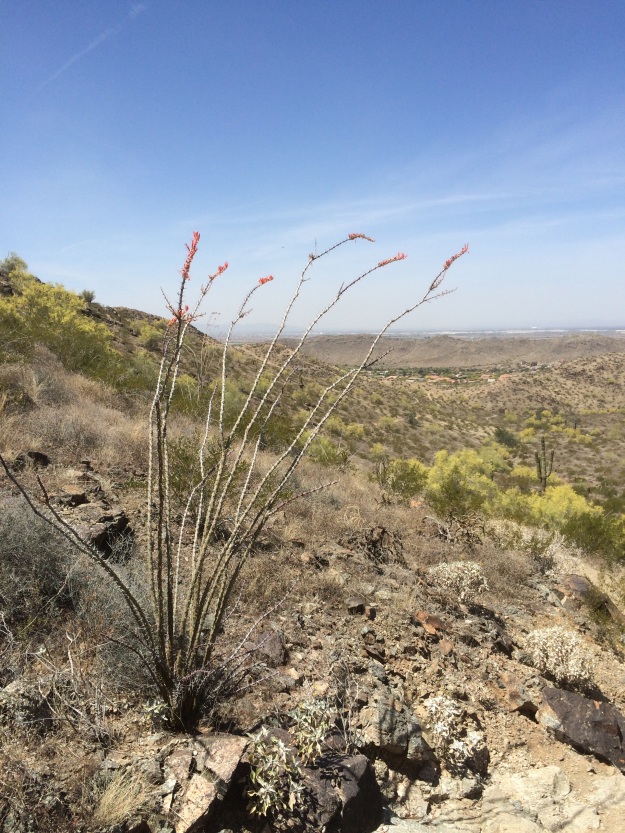 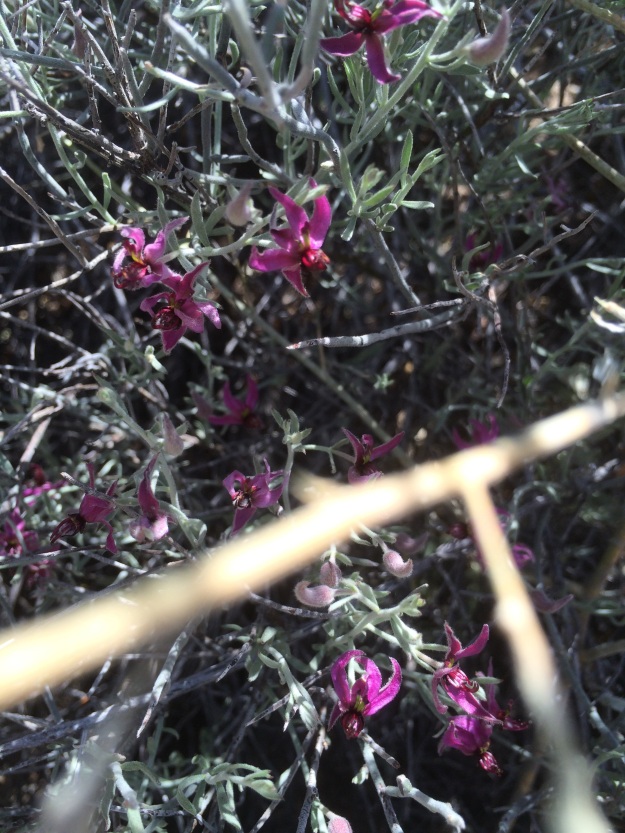 Some form of Smokebush, Psorothamnus sp. (?), but the only references I have would say not because it occurs at lower elevations??? Guess I’ll have to dig through some keys. Very pretty though but not common on the Alta trail. I did see it later at Boyce-Thompson though.

At some point high on the Alta I quit using my poles that had been a big help. My left shoulder had begun to lock up and I readjusted their length shorter thinking I had been holding my hands/and the poles, too high, but my shoulder was already sore and my neck was beginning to lock up so I quit them and let my arms swing. (Now I think it was the straps on my daypack.) I guess I could have just over done it as I had been using them actively especially on the steep up and down hills, kind of the point I thought.

I was a little concerned as I was tired, low on water and my phone was almost dead (Too many pictures and apps running in the background I guess). I had thought that I could handle this without much problem. A portion of the trail crossed back and forth from the north to the south face of the ridges before it began its rapid descent through switchbacks, around ridges, across washes until it arrives at San Juan Rd where the actual trailhead is, a half a mile in from the closed gate where I had parked. While descending from the ridge the trail is on the south-facing slope and the flora was more sparse. Teddy Bear Cholla occurred in large patches. By this time my observation skills were dulled and I wanted to be done.

I ran into only three hikers on the trail, not to be unexpected with my late start and this being a Friday I suppose.  I did have it pointed out to me though that this was a mild day temperature wise.  There are many trails here in the Preserves and other Phoenix area Parks and the locals all get to them early or in the cooler winter months though while driving around I saw a group of trail runners high on one of the other ridges 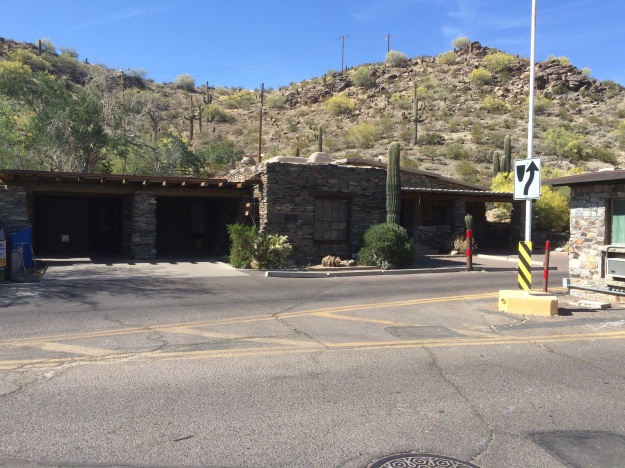 This is the first Park I visited and the buildings here are indicative of those I’ve seen elsewhere well cared for and designed to fit into the landscape utilizing native regional stone. This is at the main gate to the South Mountain Preserve.  There was no fee to enter this Park, but the State Parks fees were sometimes stiff varying from park to park, set locally.