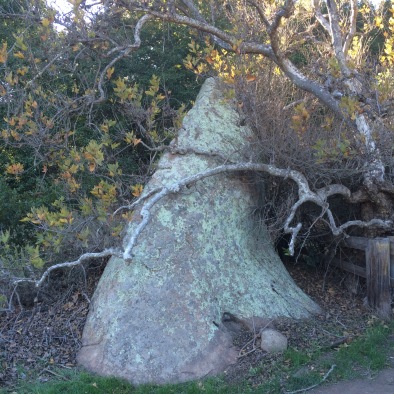 Many of us forget that our ‘shade’ trees are flowering plants as well. Pictured is Platanus racemosa, a native Californian at Bishop’s Peak one of the Nine Sisters. Platanaceae, Proteales, Eudicots 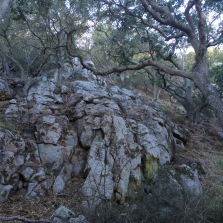 Quercus agrifolia growing with Poison Oak amongst the rocks and thin soils on Bishop’s Peak in late fall after an extended drought period. Fagaceae, Fagales within the Rosids. 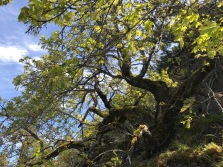 The spring flush of growth on an Acer macrophyllum growing out of the tumbled basalt of the Columbia River Gorge in Memaloose State Park. Sapindaceae, Sapindales within the Rosids. Yes, the Aceraceae is gone and Maples are ‘Roses’…not really, but they are cousins. “The maples have long been known to be closely related to the family Sapindaceae. Several taxonomists (including the Angiosperm Phylogeny Group) now include both the Aceraceae and the Hippocastanaceae in the Sapindaceae. Recent research (Harrington et al. 2005[2]) has shown that while both Aceraceae and Hippocastanaceae are monophyletic in themselves, their removal from Sapindaceae sensu lato would leave Sapindaceae sensu stricto as a paraphyletic group, particularly with reference to the genus Xanthoceras. Sapindaceae, Sapindales, Rosids

While working on a blog posting over the spring of ’17, Palms, Bananas, All Monocots…Oh My! Their Similarities and the Differences that Distinguish Them From Dicots…and why this should matter to you! discussing Monocots, I necessarily said much about Dicots, those vascular, seed producing, Angiosperms (flowering plants) with two cotyledons or ‘seed leaves’.  These were the two major groups of Angiosperms that I grew up with in the gardening world…but, while I was working in my career, this began to change, beginning  some 25 years ago.  I’d been aware of the term Eudicots, or ‘true’ dicots, and knew that all Eudicots also fit within the older category of Dicots, while a small portion of the latter, are left outside.  I was unsure how these differentiated and so, ignorantly (not a bad word), blurred the two together as many have been doing since the concept of Eudicots was first put forward.  The differences between these two for me seemed very ‘arcane’ and fussy, focusing on the tiny pores or furrows, colpi, on pollen grains.  But it is more than just that.  To really understand what is going on in the esoteric world of taxonomy, the naming and organizing of plants and their relationships to one another, you need to look at the genetics, the DNA ‘fingerprints’ of a plant which allows us to follow evolutionary paths back from the plants of today through their ancestors to the earliest forms of life on Earth.  It is about the phylogeny, the ‘history’ and relationships that tie plants together. END_OF_DOCUMENT_TOKEN_TO_BE_REPLACED