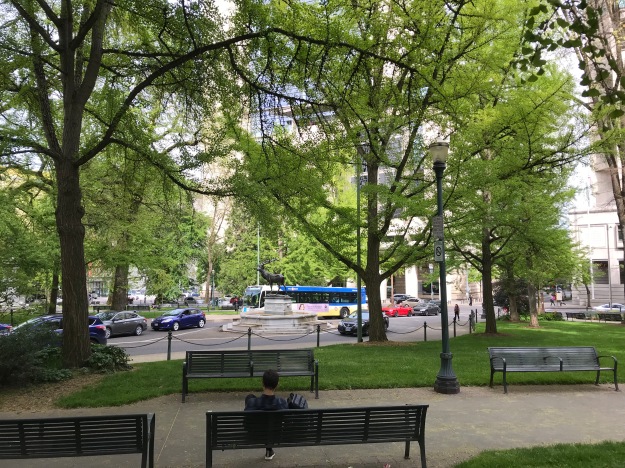 There are six Ginkgo trees here along Main St., on the north side Chapman Square, downtown, they are the most abundant species on the two blocks and the smelly not-a-fruits that drop in the fall demonstrate that many of them are female.. You can see the Elk fountain, one of several fountains once installed so locals could ‘water’ their horses. Only two the Ginkgos on the two blocks are male clones that I know of, the others are a mix of male and female seedlings. The male strobili are still in evidence on the trees. The female trees appear to hold their strobili on higher branches, as I could see nothing on the available lower branches with my bad eyes.

Mid-April and the Ginkgos are flowering….well, technically not ‘flowering’, because they aren’t angiosperms.  Botanically speaking, they are doing what they do instead, forming the little structures that contain their sex organs for what would most likely be failed attempts at reproduction.  Think about it, in a community filled with males no progeny will be produced.  We were on one of our walks down an inner section of Tri-Met’s Orange Line, approaching the Tilikum Bridge, when I noticed this event…I was a little surprised.

If you know much about Ginkgos you probably know about their fruit, which again is not technically a ‘fruit’.  Only angiosperms, true ‘flowering plants, form ‘fruit’.  The Ginkgo’s ‘fruit like’ structures are notoriously stinky when they become ripe, smelling like what many describe as being similar to dog ‘poo’, others liken it more to ‘vomit’, either equally unpleasant, when they fall to the ground and splatter or are stepped on…one of the reasons why these trees are cloned, grafted, by the nursery industry….By cloning selected forms propagators allow us to remove the chance of purchasing a female tree…unless in their zeal to bring a particular form to market they select a tree that hasn’t flowered yet….Without looking at their chromosomes, it is nearly impossible to determine the sex of a juvenile tree.  Clones stay true to their sex, so if their scion wood, or buds, are taken from a male tree, the result will be a male clone.  Ginkgos are a dioecious species, ‘di’ meaning two, so any one individual plant produces only male or female structures, so it takes two trees, of opposite sex, to produce viable seed.  Monoecious means that an individual plant produces male and female structures.  In Ginkgo spp. and the non-flowering gymnosperms these sexual structures are called stobili or singularly, a strobilus. END_OF_DOCUMENT_TOKEN_TO_BE_REPLACED