Taken in ’15 this shows the typical pattern of leaves as they emerge from the center of the rosette.

Taken Sept. 29 this closeup shows the different pattern as the primary peduncle begins to shoot up with its pink/red coloring and the congested pattern of thinner, narrower, bracts crowding around it. This change can be seen in any Agave as flowering beginns, showing before the peduncle arises. 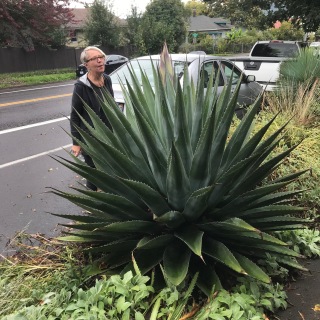 We came home at the end of Sept. from a week at the beach and found our Agave montana beginning to ‘shoot’.

It’s October in Portland and my Agave montana is in the process of flowering…I know, we’re heading toward winter, with its rain and average low down into the mid-30’s with potentially sudden damaging temperature swings from mid-November into March dropping below freezing to the low twenties, with extremes some years, generally limited to the upper teens, though historically, some areas have dropped into the single digits, those Arctic blasts from the interior….Winter temps here can be extremely unsupportive of Agave’s from ‘low desert’ and tropical regions.  Combined with these cool/cold temperatures are our seasonal reduction in daylight hours and its intensity (day length and angle of incidence varies much more widely here at 45º north) and the rain, ranging from 2.5″ to 6″+ each month here Nov.- Mar., resulting in a ‘trifecta’ of negative factors which can compromise an Agave, even when in its long rosette producing stage.  Any Agave here requires thoughtful siting with special consideration for drainage, exposure and aspect.  For an Agave, conditions common to the maritime Pacific Northwest are generally marginal, yet I am far from alone in my attempts to grow them here.  Previously, in April of 2016 I had an Agave x ‘Sharkskin’ flower, a process that spanned the summer months, taking 7 until mid-October to produce ripe seed.  I was initially a little pessimistic this time about A. montana’s prospects.  Why, I wonder, if plants are driven to reproduce themselves would this one be starting the process now? END_OF_DOCUMENT_TOKEN_TO_BE_REPLACED