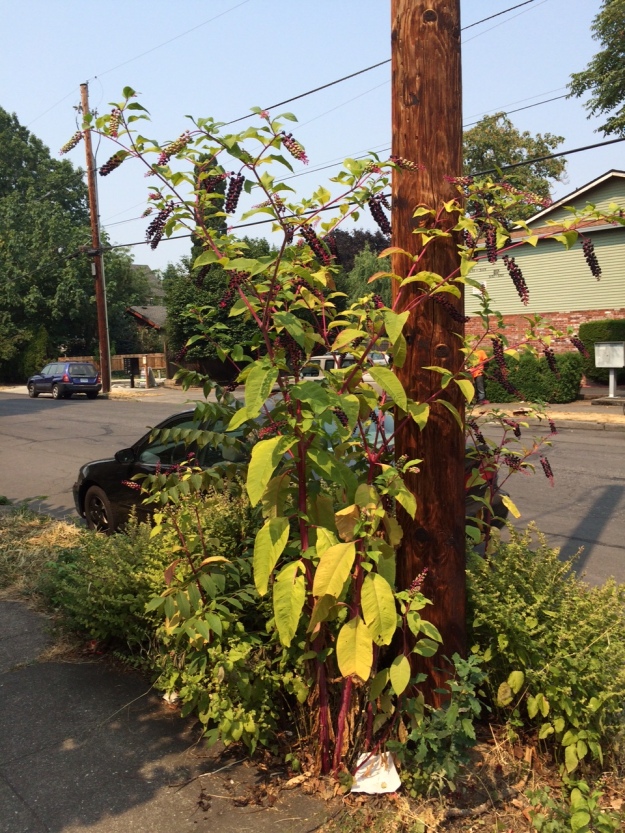 Pokeweed, Phytolucca americana in my neighborhood growing in a parking strip well over my 6’2″ height.

It’s true, the longer that you garden, the more you realize that you have to learn! And, that sum total of bits and factoids to learn in the garden universe, is itself changing over time! Gardening can be a ‘wild ride’ through a dynamic and evolving world. We can never have it all figured out!

Gardening in Parks has you building these relatively long term relationships with multiple sites. For sometimes slow learners like I can be, this broader scope can give you different insight into change in the garden. Different soils, different histories of use, different plantings trundling down the path of time in often times very different directions. On one site plants perform well with little conscious intervention on our part, while on others, they struggle or even die. As a home gardener you see this when you visit the gardens of others, but it’s a different relationship and you don’t really know what has gone into the development of someone else’s garden.

Here it is having insinuated itself in my own garden with its almost succulent leaves and little panicles of flowers growing up between a Taro, Calla Lily and a Banana.

One of the things that you notice when you garden on multiple sites are weeds. One year you begin to notice a new weed on one site. Maybe you’ve seen it around town, maybe it had escaped your notice previously. You identify it or at least know that you didn’t intentionally bring it in, whatever it is, maybe pull it and make a mental note. Maybe you miss it for a while and it increases before it draws your attention and you hoe, weed or spray it…and it disappears, for a year or two. Then maybe it shows up again, in a slightly larger area, or on another site. You begin to see it more frequently around town growing in neglected parking strips or ‘abandoned’ vacant property. You watch it increase around town where it is largely left on its own to increase. Then, later you find it growing on a site where it is exploding, where it hadn’t been much of a probleml before and you realize that it is perfectly camouflaged, perhaps its leaves and stems blending with what is planted there, coming to your notice only as it blooms or starts setting seed! You come in with a string trimmer or hand shears and cut the whole landscape or a portion of it down and bag it depositing it in a dumpster, hoping to contain it, knowing that it is now loose on the wider landscape.

Remember this is a first year seedling. Obiously it’s rather promiscuous, flowering in its first summer and here it hasn’t taken on any of its ‘showy’ red stem color.

You see weeds move in and often proliferate below our public ‘radar’. At a certain point you realize that it is established and has become a part of our contemporary landscape. Another weed that will dog us from here on out. As aware gardeners we see much earlier than do others this repetition of invasion and proliferation. Many of todays’ weeds weren’t here when I started gardening in Portland 30 years ago. Some were but perhaps struggled until they found the right growing conditions. They are plants after all and do have at least minimal requiremens. Other plants seem to have to reach a certain population threshold before they ‘suddenly’ explode across the region. Sometimes these are wind pollinated grasses. I’ve seen examples of that growing a few in my home garden, observing them behave themselves and then planted a hundred or more in a swath in a landscape and watched them attempt to spread everywhere! Others, who study weeds, see weeds like Crab Grass, Digitaria palmata, a warm season annual, now all over the City in hell strips, disturbed sites and even developed landscapes, argue that it is proliferating because our conditions are shifting to the warmer drier summers that it prefers. Thirty years ago I almost never saw this here. Other plants like Clematis vitalba, that was in its early stage of invasion then, has invaded landscapes all over the city because it was left largely on its own. This plant is extremely prolific. For it it has been a game of numbers, over time, overwhelming landscapes through sheer numbers of seeds.

We are not a society of gardeners. As a population we aren’t even particularly aware of our living surroundings, our landscapes. It is no wonder that we keep suffering invasions by an increasing number of species. These days as I walk around the city I only wonder which will be the next weed to dominate. 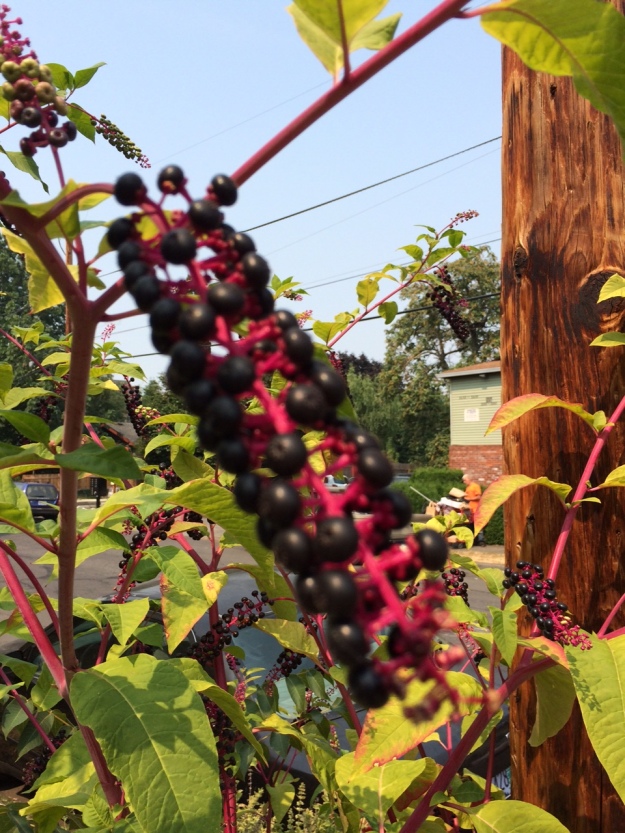 It does have several ornamental attributes including its dark fruit on red stems and birds seem to like it as well. This could explain its frequency of occurence in parking strips with birds perching above, which should also warn us to look out for it under tress.

It was ten or more years ago when I saw my first Pokeweed, Phytolacca americana, here in Portland, a native perennial of the SE US. It was in a hellstrip 5 or 6 blocks up the street from my house in front of a rental property. I watched it go through its cycle all of the way to fruiting and wondered if it might be one of the next. The fact that it was growing in an uncared for hellstrip was a strong indicator that it had the vigor needed. Over the years since, I have seen it here and there, never dominating, but now it has appeared on the City’s ‘watch’ list, meaning it could potentially become a serious problem. It will be interesting to see if it follows the path of so many other weeds which are largely ignored until they reach a problematic level, and we are overwhelmed, by yet another well established weed, that has become a part of our contemporary urban landscape.

3 thoughts on “Weeds, Patterns and Pokeweed”