A failed Norway Maple on SE 49th. This picture was taken June 28th, five days after a big rain event. You can see that this tree has been struggling for some time as evidenced by the dead branches still in its crown and the stressed flagging leaves up there. The girth of the trunk is greater than the width of its planting space. It is pinched beneath the overhead lines and the requirements for street trees regarding road clearance. It’s height has been ‘controlled’ and limited over the years.

Trees fail all of the time and when they are older, this can be quite spectacular, or devastating, if your car, home or an individual have the misfortune of being in the its path.  Like most people I used to believe that most such failures happened as the result of storms, and many do, but it is relatively common for trees, or major limbs, to come crashing down with calm conditions in the Spring. The new flush of growth brings with it a great deal more tissue and water weight than a tree in active growth has previously supported or, for a tree struggling, compromised by the burden of significant rot in its core and/or limbs.  Look at any tree and look at its girth, its canopy spread and on many species, its long, often horizontal limbs and try to imagine their weight.  To help with this fill a couple of buckets with water, lift them and try to hold them horizontal away from your body.  Trees are static structures, comprised of countless overlapping fibrous layers, much of it hard and rigid with a great deal of compression and torsional strength.  The were ‘born’ for this.  Few of us would last for more than a few seconds trying to support so much of our own weight on extended arms.  We shouldn’t be surprised when they fail, even as elegant and as well ‘engineered’ as they are. 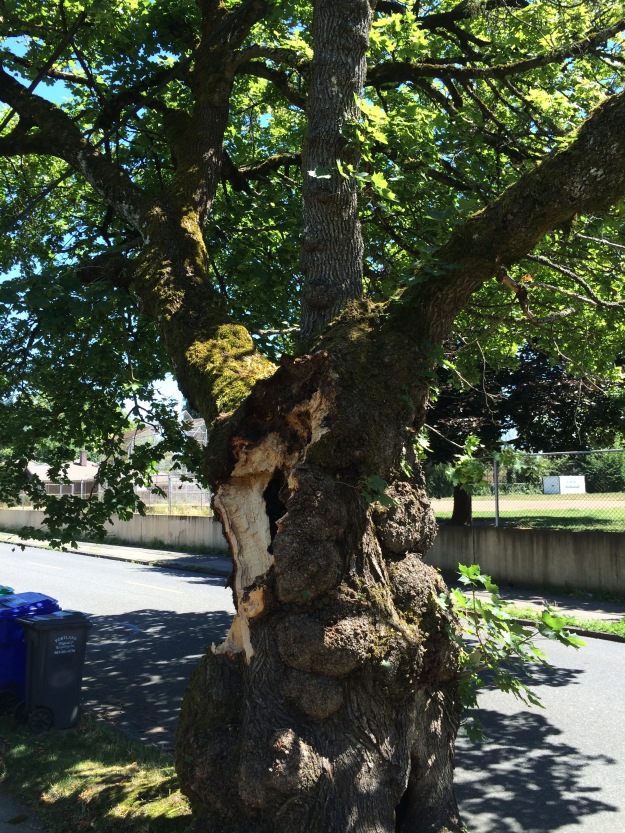 The tear is large. Three other main limbs originate from the same point creating a weaker structure that will be prone to failure whether there is any rot or not.  The four branches, now three that remain, would move independently of one another in the wind creating tremendous shearing and torsional forces at their shard point of attachment.  There bulk weigh, even without wind, will create steady forces that pull away from one another and because they are so close there is less healthy tissue support each branch compared to a more healthy structure on which each branch would be separated by a foot or more along the length of the trunk.

This is a good 2′ across. The darkened portions in the center surrounding the enter hollowed out and rotten core of the tree.

It can be instructive to examine a tree that has failed in this manner.  Many trees self prune, shedding smaller limbs from year to year.  Humans have a propensity to prune our trees, often that have been planted in isolation from one another, and this affects their pattern of growth.  Sometimes we attempt to keep trees within limits that work in opposition to their genetics.  We cut them hard, repeatedly, changing their form and often compromising their structure.  We may think that by keeping them contained and limited that they will be less likely to fail and do damage to our other property, but this is often incorrect.  Every cut introduces the opportunity for rot in a tree.  The bigger the cut, the longer air and moisture can continue the rotting process.  Bad cuts can further compromise a tree by impeding its normal response to a wound.

This hole, low and on the south side is one of several, from old wounds that have remained open for years. From this point you can see down through the trunk to the ground. It is completely hollowed out.

The pictures of that follow are of a Norway Maple that suffered a major failure.  Looking at what remains, the massive trunk with relatively small limbs, most originating close together, leads me to believe that this tree was pruned very hard in its past leading it to ‘sprouting’ the several, and no doubt more, branches that comprise the canopy today.  This is an inherently weak structure with relatively weakly attached branches coming from the same position on the trunk.  I rode by this tree just west of Portland nursery.  Rot was extensive throughout the trunk from the crown to the roots.  Several other holes in the side were still open before the failure.  Some trees can survive for many years with such extensive rot, but they are compromised nevertheless.  There was a recent storm with significant rain.  I don’t know if it failed during this event or shortly after.  I suspect after judging from the condition, turgidity, of the leaves on the fallen portion.  As I opened, any tree can fail, a tree that is compromised by a storm or the person pruning it is much more likely to fail over the short term.  When pruning the health of the tree, its structure, must always kept in mind.  If a tree will grow beyond the expectations of the property owner it is best to either not plant it and chose a smaller tree, or, if it’s already their, to remove it if it cannot be safely thinned and reduced.  We are often in a hurry that we chose a tree that will fill in quickly and fail to consider the consequences down the road. 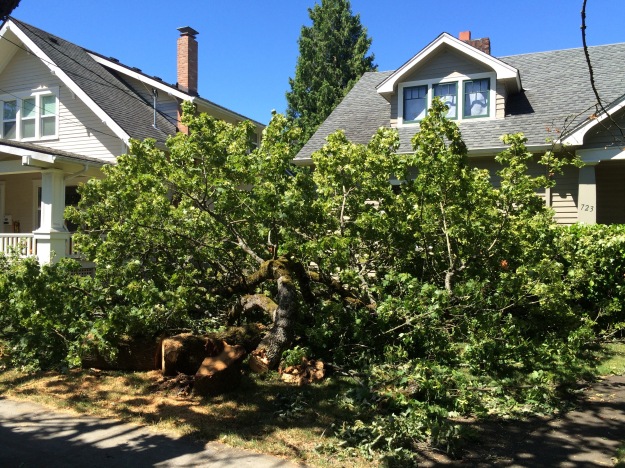 The fallen limb in the front yard. While this has broken free of the trunk, thereby no longer adding its weight to the forces at work to split and tear this tree down, the tissue that remains supporting the remaining crown is compromised and will obviously never callous over and close the massive wound.

I encourage readers to go to my earlier postings on pruning art, health and structure.