We ‘need’ charismatic mega-flora today, plants that scream out to even the most plant blind of us to take notice, those that create such a sudden and uncontrollable ‘stir’ within us that our simple glimpse of them breaks our momentum, our chains of thought, interrupting whatever we’re doing in that moment bringing about a reflexive interjection, cause us to take notice, create an uncontrollable urge to stop what we’re doing and come back for a closer look!  To tell our parents, partners or friends, to drag them back, for a repeat performance or to see if what we saw is really there or merely a mistake of perception.  And they do come back.  I see them every day, sometimes dragging disinterested friends to see this unimaginable impossibility.  I hear them when I’m out working in the private part of the garden with excited voices, sometimes expletives, “Look at this ‘F@#$ing’ thing! Can you believe it?”  I love this. They’ve come for ‘Monte’!

END_OF_DOCUMENT_TOKEN_TO_BE_REPLACED 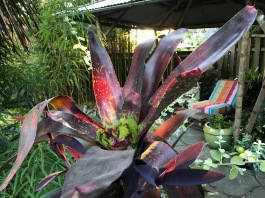 The low angle evening sun really lights the red up in this one! 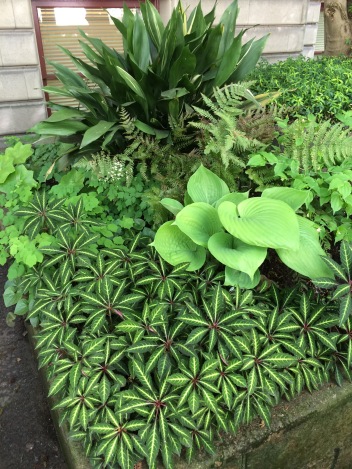 Hibiscus x ‘Snow in Summer’, is one of the Fleming Brothers hybrids. The flowers are 8″ in diameter with deeply lobed bronzed leaves.

I learned this plant as Acidanthera murielae 30 years ago, though now its known as Gladiolus callianthus ‘Murielae’ has an elegant symmetrical 3-parted flower other than the missing ‘red’ blotch on the ‘upper’ tepal. 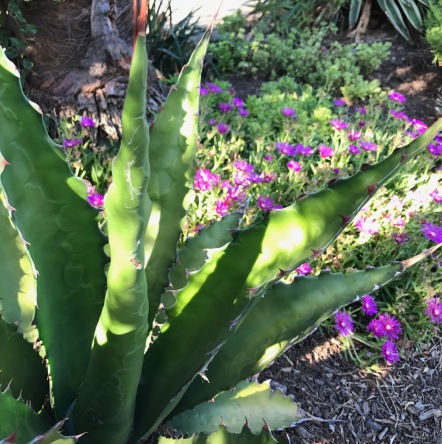 Agave gentryi ‘Jaws’ and Delosperma cooperii both ‘succulents’ that are well adapted to heat and though they do best with an occasional summer soaking.

Hippeastrum x johnsonii, commonly sold at florist shops as Amaryllis, looking much like a Lily, but in family Amaryllidaceae, characterized by its flowers held in umbels. Seen around it are other Monocots, Bilbergia nutans ‘Variegata’, Hakonechloa macro ‘Aureola’ and Astelia chathmatica ‘Silver Spear’.

Beschorneria septentrionalis, a Mexican native and Agave relative in the Asparagaceae. This is not very often successfully pollinated here in our wet early spring. Maybe a couple of fruits ever form where there were dozens of flowers.

A long shot, from beneath the ‘Pagoda’ towards the house and front gate. 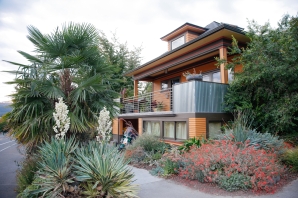 Photo thanks to Josh McCullough 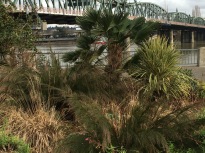 Winter structure. This photo, taken in February ’16, shows evergreen substance of the Trachycarpus wagnerianus, Cordyline and the wispy Rhodocoma capensis solidly above the deciduous Molinia, at least until it is cut down. 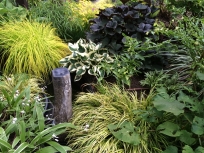 Looking north in Spring across the pushing Molinia toward the Butia x Jubea in the center with Penstemon left and Acorus on the right.

Of all the things our gardens do for us, arguably the most important is their role as our teachers, even in winter when a temperate garden ‘rests’, its surface crust or top few feet, frozen, maybe sheltered beneath the cover of snow, or, as ours so often are, simply too cold for active plant growth, the soil wet, the rain too heavy to percolate fast enough down through its layers, without the active aid of either the direct heating of the sun or its effect on plants, through evapotranspiration, pumping water back into the air as the plants grow.  Gardens teach patience.  They encourage us to become more careful observers…to think and plan, to anticipate and prepare, to understand that there is more going on here than we can readily see…and they teach us about faith and trust in the natural world, that there is always more going on than we can see. END_OF_DOCUMENT_TOKEN_TO_BE_REPLACED

The Portland Japanese Garden, two well shaped Acer palmatum. To prune this way takes time, attention and an understanding of how your subject grows and how it will respond to your cuts. This is generally true of the garden as a whole, how it as a whole will respond to your management and changes. It requires an understanding of the plants themselves, the site conditions and how they function together.

Loree, of Danger Garden, posted a comment  and a link in Facebook a few weeks ago, to a story about a gardener in Australia and what gardening meant to him in the online Planthunter blog. It elicited an array of comments, both supportive and not.  She posed the question, are the ‘best’ gardens the products of an ‘organic’ process, produced by the gardeners themselves, in intimate relationship with their place?  Which raised the question, can garden designers create truly beautiful gardens for others on landscapes that they don’t have this personal connection to?  Her question caused a flurry of comments, several containing a lot of emotion.  Loree’s simple question produced a fair amount of ‘heat’.  I found the array of responses, and the conflicts they brought to light, provocative and I think a lot of that heat comes from the fact that our modern society has become largely estranged from the natural living world.  I spent quit a bit of time thinking about it.  Below is what it prompted in me.

I retired from Parks after a career of mostly fixing and tweaking designs that I had nothing to do with, but ended up resposnisble for, tearing out neglected landscapes that had became grossly overwhelmed and out of balance by overplanted and aggressive plants, others that were lost to weeds and invasives, others still that were stomped out and abused by the public largely because of their siting and the public uses which they had to endure, a public that is often indifferent to the living world and its requirements and their resulting traffic patterns that designers thought that their massing could channel where they wanted.  I did this while working within an organization that undervalued the plants and the horticulturists who cared for them….I was still able to create a few places that the public responded to positively. END_OF_DOCUMENT_TOKEN_TO_BE_REPLACED