Many Arctostaphylos, like these A. densiflora ‘Howard McMinn’ make admirable landscape plants on xeric sites. This is above Riverplace Marina on the east facing bank of the Willamette in nutrient poor, compacted fill. It shares the site with Compact Oregon Grape and a variety of local dry site natives, Mediterraneans and Californians.

Thirty years ago, when I first moved here to the Portland area from the Central Oregon High Desert country, very few people were growing Manzanita.  Those plants that you did see were local natives that you had to search out, remanent populations of widely scattered stands, in western Oregon, in the Cascades, parts of the Gorge and Siskiyous or on old stabilized dunes above the beach, e.g., near Manzanita.  They were mostly ignored in the trade, barely recognized by anyone other than those in the Northwest native plant societies and hikers who would go out on forays botanizing. When I still lived in Bend, I would occasionally order dry-land native plants, like Cercocarpus, that could be seen in the Ochocos, from Forest Farm in southern Oregon.  My first two horticulture books, other than the many vegetable growing guides I bought from Rodale Press and Steve Solomon’s guide, were the Sunset Western Garden Guide and Arthur Kruckberg’s, “Gardening with Native Plants of the Pacific Northwest”…I went through them over and over again.  In the small space Kruckberg devoted to Manzanita he wrote, in the first paragraph, “Only Arctostaphylos uva-ursi…, A. nevadensis…and possibly A. patula are hardy in colder areas.”  Because I lived in one of these ‘colder areas’ this stayed with me, effecting my view of the genus.  I’ve already posted on A. patula, of it growing in Central Oregon, the eastern slopes of the Cascades and as a specimen outside of our breakfast window in my childhood home.  Other than A. columbiana, a denizen more of the western Cascade slopes and the high ground of the Coast Range, Kruckberg barely mentions the other species and forms…of which there are argued to be between 50 and 100, primarily in California and  southern Oregon.   END_OF_DOCUMENT_TOKEN_TO_BE_REPLACED 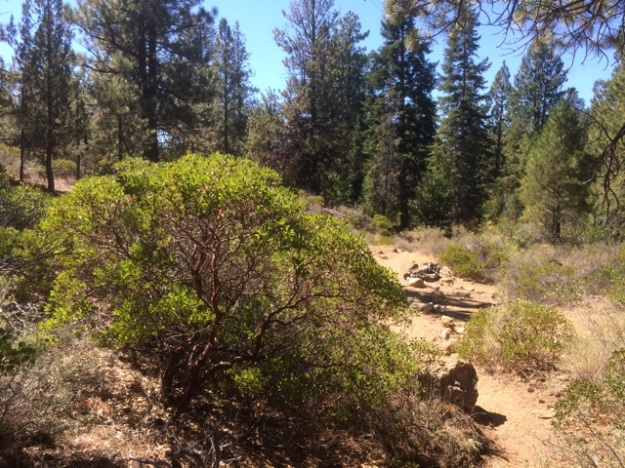 Arctostaphylos patula growing on site near Whychus Creek south of Sisters, OR. Here it is 5′ tall growing in a mixed condifer forest along with Doug Fir, Grand Fir, Noble Fir, Ponderosa Pine and Western Juniper.

Outside our breakfast window, when I was a kid, was an Arctostaphylos patula. I never thought that much of it at the time, and how unusual it was, that sometime, probably by the late ‘40’s or early ‘50’s, somebody had dug one up and transplanted it to our yard in Redmond. They are denizens of the eastside Ponderosa Pine forest ecotone not the Sagebrush ecotone where I grew up. We averaged less then 10” of precipitation a year, too dry (For those who don’t know Redmond, OR, lies wholly within Oregon’s High Desert country that puts it in USDA zone 6b, -5 to 0 F). It grew in this little jog of the house facing northwest. I’m sure it got overspray from when we dragged hoses and sprinklers around to keep the lawn green, which is probably why it had grown with some vigor, having a form that you wouldn’t see in the Ponderosa – Juniper transition band sixteen to twenty miles away. In my memory it was always clean, with bright green foliage, part of which can be attributed to the low desert humidity and our sandy soil. I wish it was still there to take a picture, but the house has sold several times and had ‘improvements’ to the structure and the landscape including an irrigation system. I don’t know whether it rotted out or they removed it for one of their remodel projects. In its day it was 6’ high x 7’-8’ across with the characteristic sinewy branches and smooth peeling red bark.

END_OF_DOCUMENT_TOKEN_TO_BE_REPLACED

The following is an evaluation I initially did while still working for Portland Parks and Recreation.  I’ve edited it a bit and added a few things to make it more current.  I think it’s important for people to know what others are doing, what they’ve tried and what were the successes and failures.  While kind of long it is still a brief look at the conditions on a few sites that were under my care and my observations concerning their performance.  As Downtown area Parks these landscapes are very accessible for those curious to see how these plants have done on the ground.  Now, most of you if your gardening is limited to your own backyards will never have to deal with landscapes so large, nor will your growing conditions, specifically your soil, be the same, I thought that it would be interesting to share this anyway, in addition to letting you know where you can come see how these plants can look in a landscape.  All were planted small as they tend to better adapt to their sites when small, but some are beginning to mature and show what they can do.  Anyway, I view our Parks as a public asset.  There are many valuable and important plantings around us, that the public is largely unaware of.  Part of my role here is to change this situation through promotions like this and by continuing to work with horticulturist to create some kind of database of public and private plantings that is accessible for viewing by the general public. END_OF_DOCUMENT_TOKEN_TO_BE_REPLACED