[I wrote this originally about 2 years ago as part of what turned out to be a too long look into the Bromeliad Family.  Here I present only the genus Puya spp. in an edited form with the addition of the species Puya berteroniana.  Go to the original article to read about the shared evolution of the several genera and families that comprise the family, why these are not considered succulents and a look at the armed defenses of many plants.  My plan is to breakout at least some of the other genera as well as I think the length of the original post may have put some readers off.]

Puya: one of the Xeric Genera of Terrestrial Bromeliaceae 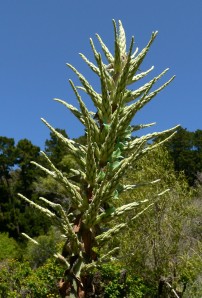 The inflorescence is very ‘spiky’ in its structure its many ‘arms’ covered with buds.

Each bud will open over time giving a long season of bloom.

The name “Puya” comes from the Mapuche Indian word meaning “point” (The Mapuche people are indigenous to Chile and Argentina.  They constitute approximately 10% (more than 1.000.000 people) of the Chilean population. Half of them live in the south of Chile from the river Bío Bío to Chiloé Island. The other half is found in and around the capital, Santiago and were mostly forced to the city after Pinochet privatized their lands giving them to the wealthy.)…the assignation is clear and the pointed, spiky, nature of this genus is immediately obvious to anyone.  But there is something easy and comfortable about the sound of the word in your mouth when you speak it…poo-‘yah.  Puya are native to the arid portions of the Andes and South American western coastal mountains.  (Oddly, two species are found in dry areas of Costa Rica.)

Puya spp., populate arid western regions of the Andes Mountains up into southern Central America.  These are terrestrial plants, relying on their roots to find the moisture that they need.  They possess the same basic rosette structure common to all members of the Bromeliad family to which they belong, including their petiole-less leaves, which clasp directly to a compact stem structure, funnelling the infrequent, and seasonal, precipitation they get into their crowns and root structures where they can take it up, a strategy very similar to Agave and Aloe which grow under similar conditions. END_OF_DOCUMENT_TOKEN_TO_BE_REPLACED